Posted on February 4, 2017 by seagullsea

based on a real event.

switzerland was the only country who made profit after ww2 and continues to thrive independly of Europe, and the more they have , the more they seem to need  to hold on to a material possession. simply farmers , vicious warriors throughout history their lack of creativity, unable to do much but draw traditional alpine flowers and cows, the swiss find an outlet to their rage through battering the less powerful and the foreigner. which is why almost all foreigners are gathered in protective shields of common cultural groups, but god help you if you are a foreigner alone who might not follow rules.. 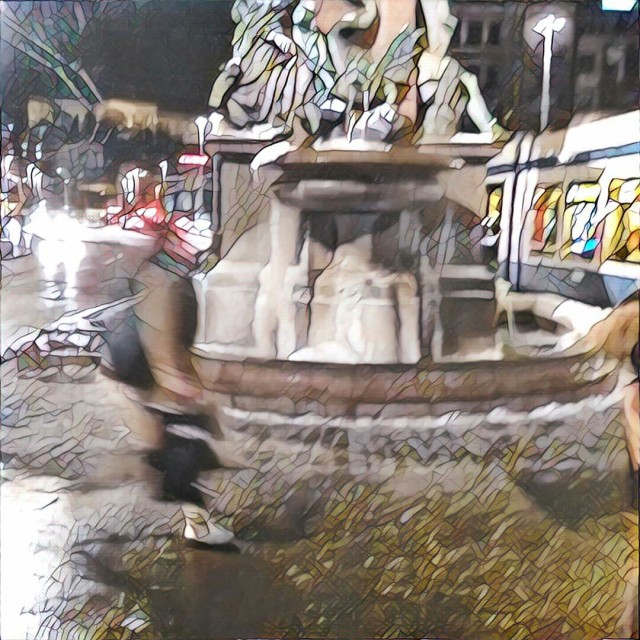 The door bell rang at around 9.30 a.m. just as she was about to shower and take the dog out for a walk right after her daily yoga routine saluting the  sun of the sunless swiss skies.

“suspicious”, she had thought , she was not expecting anyone, her heart beat increased, could it be a long lost friend? a foreign word in her vocabulary.

The door bell rang again and again, she opened the door, three people stood there, one man, a ginger haired hippy type with a short pony tail flashed a card “Police”

“Do you have the money?” , asked the ginger haired, in swiss German.

“The money you have to pay”, repeated the ginger haired as the solemn stares of a black haired stocky type who later would prove to be the bad cop, and a young non blinking  staring  blond woman  who stood there displaying  a concentration camp guard ancestry potential blocked her exist gingerly.

“I don’t have it at home..” she muttered, “Can i please get it to you later? i was on my way to the shower and i am not feeling well” she sniffled.

“Say “is  to me” hollered the ginger haired with the pony tail,who had  closely resembled a photo she had once seen in a  German magazine at  her grandparents place of the Baader Meinhof group . a German radical left group that had  terrorised Germany.

Du in German is meant for friends, children, inferior beings whereas “is” is a term of respect.

She then switched to confused hysterical English.

This is when the Donald Trump jr. look alike came in for the hunt, ok , we have been patient enough , he hissed, taking out handcuffs, “that’s it , you are under arrest now”

then he began to scream “Where is your wallet?”

She began to weep, crying , begging, please, i am in my pyjamas, she stood in grey stretch pants with bare feet as the strangers stared at her with open resentment and indifference to her pain.

The dog used this opportunity to flee..

The Baader Meinhof gang member went after the dog and scooped her up stroking the dog  fondly while the Donald Trump jr. had handcuffed her behind her back and proceeded to bark orders.

“Where is the leash?” Baader meinhof pony tailed member demanded, and she nodded towards a pile of clothes by the door..whimpering ..

Donald Trump jr. meanwhile commended her to put on her shoes and jacket, as she weeped, unconcerned  her wrists were hurting in the handcuffs.

Meanwhile the concentration camp guard found a way to pass the time , she took out a mobile phone and proceeded to take photos of the  messy rooms while muttering in German “this is not normal” …

She wanted to explain she was moving , but found no energy to form the words and only gibberish came out in between crying.

The Baader Meinhof led her to the vehicle in sweeping movements,

so this is what it must be like to be kindnapped, she had thought

The dog was placed in the back, dressed in her jacket, silently obeying, as if she knew not to resist arrest. she was Swiss after all..

The vehicle went to the nearest bank branch and the normally friendly young  Italian behind the desk looked stone faced as if he had never seen her before, as if they had never exchanged pleasantries and jokes about the German swiss and admiration to Given, the young African Swiss bank manager..

“where is Given?” she begged without answer. Given would save her grace, he was a genuinely good person and surely his African roots would dictate a person who had his priorities right; heart and soul come first! tortured middle age  maternal women are not acceptable in the African culture …but Given had the day off..unfortunately..

The Baader Meinhof gang member led her to the bank automat and commended the sum she owed, she punched in the number and muttered in mad monologue to the blond woman who stood stoic looking on , doing her job as a concentration camp guard progeny …”maybe i should throw the money on the floor so you can lick it up ..since you  all adore money so much..”

Her mad monologue in English  in the vehicle spoke of the difference between Jesus of Nazareth who had come from her people and  the swiss church going hypocrites with their attachment to money that had led to her humiliation.

“You can take everything from me, but when i die, i will have my education whereas what did you do in school ? probably were the worst pupils” she muttered..

Later much later after Baader meinhof agreed to give his name, so she could make a complaint of the treatment to the authorities which they will no doubt ignore and delete immediately if it is an email or throw in the bin if it is in a letter form, confided to her that he actually graduated from business school in accounting but sought out a more interesting job.

“So this is interesting? torturing people?” she inquired calmly now after she had fainted on the floor of the police station weeping

Baader Meinhof gang member suddenly became her best friend, her only friend, he stood stroking the dog, admitting he had two at home while she stood sober now, seeking some sort of explanation..

She unraveled the saga of her life in switzerland; the domestic abuse, the police who came and did nothing , who never arrested her husband after he had beaten her and the children so badly they had to seek help in the hospital for a broken arm , for a dislocated foot, the emotion residue and how all that came up again..

Why don’t you go after those men who beat their wives and children ? why do you treat me as a criminal? she asked

“Only doing my job” , was what the young Italian at the reception  of the bank said and asked her to leave, after she had asked why he had ignored her.

“Only doing my job” is what the Nazis said, she said too loudly, causing discomfort to the customers of the Swiss bank.

She was there to shock , to horrify, to shake some sense in the world,but not here, where she could be handcuffed and throw in prison if only she would bend the rules of submission to authority, of paying on time, of having a neat organised home, of speaking  Swiss German correctly addressing police officers with the fear they sought to see  and not the disrespectful chutzpa of a rebellious soul who should have been on the next flight out of there, if it had not been for the magical effect of the mountains at sunrise, and the duty of having to sort out 20 years of collectibles ..

The Kurdish brigade would be there in two days time to throw away every single piece of furniture and object and leave nothing , the Kurdish women association would provide cleaners to clear out her space and then there would be nothing left to remind anyone she had ever been there except the children who had turned their backs to her in shame, she was an embarrassment and they like so many Germanic people, having the DNA of Europe’s crusaders , would seek out the powerful figure, the führer father, while she would be led away like Joan of Arc to be burned if she would have remained.

Suddenly a river of calm acceptance flooded her veins, she stood by the small  police station  as though looking at star constellation and things that were eternal like the scream that strangled her throat whenever she considered her mother fleeing Europe as her family burned in concentration camp cremitorium by people who only did their duty.

She suddenly justified the police , even the blond unsmiling concentration camp guard progeny seemed all of the sudden like a piece of a puzzle that fit so well this swiss scenery, the flowing river, the cathedrals  and their  tall cross, the small square where the nativity scene would repeat itself every single December like clock work, without any stich of  imagination ,a woman dressed in white with makeshift angel wings would read in swiss German the nativity story to the gathered crowd as the elderly looked on with praise in their eyes instead of stars.

Suddenly she felt a calm. she knew she was never meant to be part of that nativity scene, she was jesus on the cross being burned by the villagers in a Marc Chagall painting, she was in the wrong exhibit, and she must leave, but then she thought about how when all that had been happening and she was taken away, the dog did not bark, she ran and hid under the bed, the police officer reported, perhaps, she thought, this is what we do best, hide.

a seagull flying over the great ocean of life observing.
View all posts by seagullsea →
This entry was posted in daily life in the swiss alps, swiss life, Uncategorized. Bookmark the permalink.